It really amazes me! I struggled for years in Los Angeles as a comedian and an actor and never thought once that this is something i should not be doing. I know what it is like to go on tour with an iconic comedian staying in the best  hotels, limos, private jets and signing for almost anything i wanted because i was the opening act for Andrew Dice Clay, and what ever Dice wanted, he got! Then back to reality…the tour is over and it is back to my 1 room apt in West Hollywood. Of course this was very early on in my career, early 90’s and i was very fortunate to live the lifestyle i did even though i was broke financially speaking back then lol.  Things got better for me and i started to make money once i was a headliner and working the big rooms and i was also getting some acting work in some notable films, (not extra work people).

I remember early on that i always said i would make it in the business of show! I have always believed in myself and my confidence and talent so i hear, is out the roof. Hollywood can take a toll on you and back in 2000 i was realizing that what i have accomplished in my career, i was at peace with and if i got out of the business…i was going to be OK. I opened a successful business and was making great money, got married and had a child and was living the dream. Stayed away from show business for the most part of 5 years, of course i would always stay involved mentally, just not physically perusing it. We moved to North Carolina opened a great bistro and we were enjoying the new lifestyle…and trust me it was great, i am not complaining, we live a very nice life.

We decided to move from NC and something pulled us to Las Vegas, so we made the plunge as we often do and came back west, with the intentions of opening a catering company in Las Vegas. I was home one night at our new place in Vegas and i got a call to fill in for a comedian. I was reluctant because i was kind of semi retired and i thought to myself, WHY?… but the entertainer in me took over and my ego started to swell and i caved in to…”Ok, i’ll do it” and i did. To make a long story short within weeks i had my own residency at the Rio Hotel and Casino and my face was plastered all over Vegas on billboards. I never looked back and i was back in the game, strong!

See, if your reading this, i came to grip to something that is very true, the old saying goes…

“If you love something let it go free. If it doesn’t come back, you never had it. If it comes back, love it forever.”

That is exactly what is going on now. I am going to Los Angeles to film a pilot for a network i am starring in. I never asked or perused this, it came to me. Just because i stopped pursuing fame doesn’t mean i don’t deserve it. I worked my ass off to get anything i got and have no reluctance to take what is mine, no matter what… if  presented with an opportunity. What i am saying is.. i never gave up or disliked the business, I love the business… i just went in another direction. I have always loved show business,  its in my blood, its calling my name, it asked me to come back,  So i am…this time i can afford to do it different, this time i grab it by the balls!

THE TOM GREEN AND STEVE O INTERVIEW IS UP! WHEELS PARISE PRANKS THE PRANKSTERS! 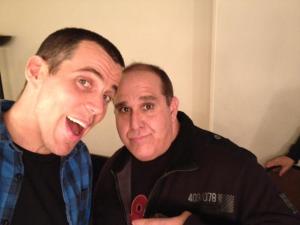 In this episode of “I DO TINGS”. Wheels interviews Tom Green and Steve O, backstage at the Starlight Theater in the Riviera Hotel and Casino. Tom Green gets personal about his battle with cancer. Tom also discusses his world tour and playing a mall in Edmonton Canada. Steve O talks about being sober for 5 years but Wheels thinks he is slurring…they both discuss Tom Green’s Sweet Cock. You gotta hear this episode! Bill Dawes discusses his role on Criminal Minds and how he never even watched the show before getting the role. Tom Garland fills us in on how Steve O picked him up in Iowa. Great show lined up for you! A must listen to show…

Listen to the show!

Check out my interview with @tomgreenlive and @steveo on tomorrows "I DO TINGS"! starring Michael Wheels Parise. idotings.libsyn.com

For immediate release: February 15th 2013.  EXCLUSIVE INTERVIEW! with, Tom Green and Steve O on the next episode of “I DO TINGS” Starring Michael Wheels Parise. Airs Monday February 18th.

Comedian Michael Wheels Parise will be doing an exclusive interview with “The Original Pranksters” “The Boys” Tom Green and Steve O, backstage at the Starlight Theater in the Legendary Riviera Hotel and Casino in Las Vegas Nevada.

About Steve O and Tom Green:

Steve-O (a.k.a. Stephen Glover) has become a household name and it all started when he snatched a video camera from his father’s closet when he was fifteen years old. From there he started producing homemade skateboarding videos featuring dangerous stunts mixed with comical behavior.

He was born in London and by the age of twelve, had lived in five countries and communicated fluently in three different languages. He holds citizenship in three countries – the United States, Canada and the United Kingdom.

After finishing high school in London, and completing a year at the University of Miami, Steve-O realized that college wasn’t for him. He enrolled in Ringling Brothers and Barnum and Bailey Clown College to help further his goal of becoming a professional stuntman. After graduating Clown College, and determined to make it in Hollywood, he began to pitch his home videos to producers.

Eventually, Steve-O’s videos made it into the hands of Jeff Tremaine (Jackass Creator/Director/Producer) who was working with Johnny Knoxville to create a stunt based reality show. The rest is history. MTV aired the first season of JACKASS in 2000. In 2001, Steve-O launched his own “Steve-O Don’t Try This At Home Tour”, establishing himself as an accomplished stage performer, at venues throughout the U.S. and in a dozen countries.

When the JACKASS TV series ended in 2002, the team moved on to JACKASS: THE MOVIE, released by Paramount in October of that year. Shortly thereafter, Steve-O and fellow JACKASS alum, Chris Pontius, were given a spin-off show entitled WILDBOYZ, which aired on MTV and MTV2 and lasted four seasons. In 2006, Paramount released JACKASS: NUMBER 2 in theatres and Steve-O continued to thrill audiences with his outrageous stunts.

In 2009 he competed on ABC’s hit show, DANCING WITH THE STARS, and lasted six weeks, despite an injury and having virtually no dancing ability whatsoever.

In 2010, Steve-O returned for the Paramount franchise in JACKASS 3D which turned out to be a huge hit at the box office for the third installment with JACKASS 3.5 releasing shortly after on DVD.

In the months leading up to the release of JACKASS 3D he immersed himself in standup comedy, which had been a part-time hobby during the previous four years. Successful performances at prestigious comedy venues such as LA’s Laugh Factory and New York City’s Comedy Cellar led to his current tour performing standup, stunts and bar-tricks across North America, Australia and Europe, which he has dubbed “Steve-O’s Entirely Too Much Information Tour.”

In November, 2012 season one of truTV’s wild competition series, Killer Karaoke, premiered with Steve-O as the host. Inspired in part by the popular Zodiak Media international television hit Sing If You Can, Killer Karaoke challenges contestants to sing a hit song while Steve-O puts them through the most hilarious and unexpected physical challenges imaginable. It’s the game show that hits all the wrong notes in the best possible way.

Steve-O has been clean and sober since March of 2008 and lives a healthy, vegan lifestyle in the Los Angeles area.

You know Tom Green from his anything-goes run as the funniest, most unpredictable personality on MTV, and his unforgettable, deliciously loony roles in uproarious film comedies including “Road Trip” and “Freddy Got Fingered.” He’s graced the cover of Rolling Stone, commandeered the coveted guest-host chair on “The Late Show with David Letterman,” and conquered the World Wide Web with his free-wheeling, wildly popular internet talk show, “Tom Green’s House Tonight.” Now, Tom brings his unique brand of hilarity to the art of stand-up comedy, his one-hour comedy special taped early this year at the Wilbur Theater in Boston is currently airing on Showtime. Tom recently headlined at the world renowned Edinburgh Comedy Festival where he performed to sold-out audiences and received rave reviews. Experience one of the great comic minds in the field of entertainment, live and in person, when Tom Green takes the stage and provides non-stop laughter with his brilliantly cracked view of the world around him.

Make sure to listen on February 18th to this exclusive interview with “The Boys” you can hear them on Wheels Parise.com,  iTunes, Stitcher Radio and a host of other podcast channels like Miro Guide, Podcast Blaster and of course on Libsyn.